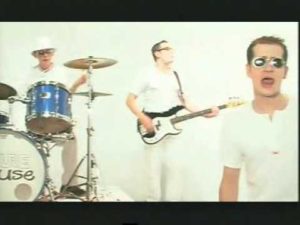 Originally signed to London Records in 1994, a rather tumultuous time resulted in the band packing their bags and heading back to Dublin cap in hand. Rather than give up, Browne and Co. saw it as a new lease of life, and self released their debut album “Shine Box”. With no interference  the album went on to feature the singles “Somebody Somewhere”, “The World and His Dog” and the smash hit “Heavenly Day”.
Around now, the buzz and hype started to pay off. The Saw Doctors asked the band to join them on their tour of the UK. Bon Jovi asked them to open their show in Dublin, Runrig were next, except they were going through Europe. The touring paid off as KOCH kindly offered to licence Shine Box around Europe.
The band then started a 2 week tour in Scandanavia that snowballed (gettit?) into a mammoth 9 month trek across Europe in a 20 year old van called “Flash”. 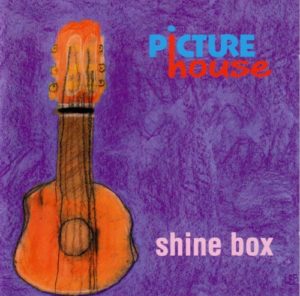 Back into the studio, East-West had taken notice in Ireland and released their second album Karmarama. This catapulted the band to the toppermost of the poppermost in Ireland.

“Sunburst” was the most played song on Irish radio in 1998 and 1999, a multinational retail group put in the song in their TV campaign and the band played countless sold out shows including the legendary Olympia Theatre and the Point Depot. An award followed with Dave receiving “The Phil Lynott song writing award” which was presented by Phil’s mother in London.

More touring commenced, (Flash was retired and replaced with “Flasher”) the band shared stages with the likes of Mel C, Texas, Meatloaf (Where Meatloaf himself asked Dave to get up a duet on stage), Marilion and then an eventful arena tour with The Corrs. Each night after PictureHouse finished, the demand for CD’s meant a sizeable amount of fans missed the beginning of The Corrs set each night. After that tour, The Corrs’ drummer Jason left to join PictureHouse.

Slowly but surely, PictureHouse’s loyal troop of fans turned into an army. Even Elton John bought 50 copies of Karmarama for his family and friends. The band finished 1999 having played to over a million people, many of whom bought the tshirt.
2000 saw the band release the live album “Bring The House Down”, again, self released and in 2001 they set about making “Madness Sadness Gladness” with Adam Kviman in Sweden. Madness Sadness Gladness featured the massive single “Everybody Loves My Girl” -another summer smash in 2002.
Fast forward 10 years and a chance songwriting session with Lasse Anderson (Son of ABBA’s Stig Anderson) produced a number of songs which Browne said “Sounded like PictureHouse”. The bat signal was sent out and some old friends responded and some new friends came along. The result was “Evolution”, An album that literally evolved, from 5 highly played radio singles to eventually being picked up on BBC Radio 2 and released on the Cherry Red Records label in July 2014.

Not ones to rest on their laurels, PictureHouse never really did the looking back thing. That is until 2017 when the band got the original members back for a gala 21st anniversary show in Dublin’s National Concert Hall. Complete with 60 piece choir the memories flooded back and a compilation album entitled “How Can I Explain How This Came To Be?” was issued on vinyl by UK label “Plane Groovy”. Tributes rushed in from all around the world including President Michael D Higgins, Bono, Dustin the Turkey, The Coronas and loads more.

2020 has been an unusual year for planet Earth to say the least. For the band it meant a summer of gigs and festivals was ruled out. An off the cuff song Dave wrote became the basis of a viral video campaign where anyone could send a message of love to the people they are missing because of lockdown.

A much sought after recording of one of the bands legendary shows in the Olympia also became available and is now being remixed and remastered and will be released just in time for Christmas.